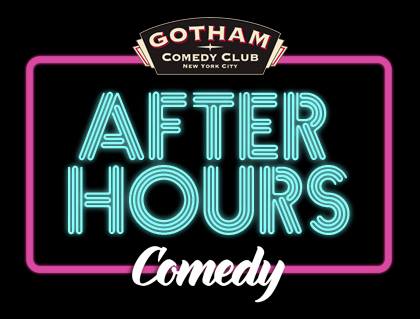 After Hours: Comedy for When You’re Off the Clock.

In these tough times, when jobs are hard to come by and good salaries even harder to come by, it’s not always easy to step away, to unwind, and to relax.  Sometimes it seems like you have to work 24/7 just to keep up.

But, we’re not robots.  Nobody can work all day every day.  Sometimes, you have to step back and relieve the pressure by having some fun, good times and laughter.

That’s what After Hours is all about.  We offer you a chance to blow off steam and reduce the stress and remind you that even when things seem like they’re at their worst, there are still plenty of things to provide laughter and joy.

So punch out, slide down the tail of that dinosaur, and come out for some laughs.  You’ll be glad you did.

The show is brought to you by:

The White, Jewish husband of a Black woman (who converted to Judaism) and the father of a 10-year-old, Biracial son, Alex’s comedy focuses on the challenges of being a supposedly middle-class parent in an era of rising income inequality and the issues that confront interracial families.  Alex has been featured on the Katie Couric Show, Sirius/XM Radio’s “Raw Dog Comedy,” and NBC’s EVB Live, and in VH1.com, The Wall Street Journal, The Huffington Post, and CNN.com.  In 2011, he won the 12th Annual Gilda’s Club (Northern NJ) Laugh-Off.

In addition, Alex is a writer, and his writing has appeared in The Comic Bible, The Washington Post, the New York Daily News, The Good Men Project, and in the literary journal, The Westchester Review.

With his charming wit and energetic characters Aaron connects instantly with his audience. He regularly performs at comedy clubs and colleges across the country and has appeared on Comedy Central, MTV, and American Movie Classics. Aaron’s humor varies from observational thoughts on the mundane to articulated commentary on society informed by his experiences in New York City as an architect all punctuated with a few splashes of wackiness.

IMPORTANT SEATING NOTE:
All tables are shared. If you prefer not to be seated with another party, you will need to purchase all of the seats at that table.